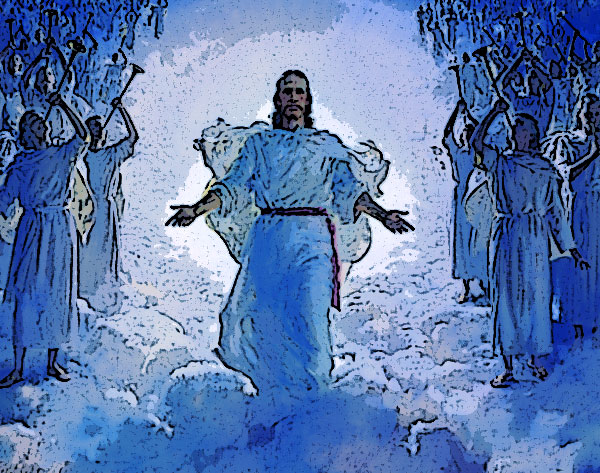 In part one, we learned that the “resurrection” was the “foundational reason” or “truth” for the “Rapture event.”  (If you have not read part one, it is recommended.)

In this lesson we are going to discuss an event that will occur right after the “resurrection.”

But I must warn you, this lesson gets pretty DEEP! So you may have to read it twice. I also recommend that you pray right now and ask God to open your eyes to the “Manna” that you are about to receive!

Many of the biblical traditions that we practice on earth are a shadow of Heaven’s realities. At the beginning of man’s creation, God ordained the institution of marriage.

Marriage between a man and a woman was established by God to illustrate the relationship that we will have with Christ for all eternity. When I say, “We,” I am talking about the “Church” or “Body of Christ.”

As members of the Christ’s Church, we are a part of his “ekklesia,” or “called out ones.” We are the bride of Christ. After this age is over, we will be united in marriage to Christ.

John the Baptist understood this truth. And he prophetically spoke of it:

What John meant was that his friend “Jesus” was the bridegroom, and hearing the voice of Jesus speaking to His future“bride” (the redeemed of Israel) brought John much joy.

The amazing and precious truth about the Bride being married to Christ will be fulfilled when the two segments of His bride, as “one unit” marry Christ at His coming.

Are you confused? What do I mean by two segments? I used the term “two segments” for illustration purposes.

And actually in God’s eyes, there are not two segments of the bride, but one segment.

Unfortunately, many of today’s Christian’s do not understand this truth.

This truth is a great mystery.

Let me explain, The future bride of Christ Is ISRAEL!

Israel exists in the form of the original branch of “Old Testament Israel” and the grafted branch of the “New Testament Body of Christ” which is new Israel.

The scriptures confirm this truth in the passage referring to Israel of the Old Testament:

“For thy Maker is thine husband; the LORD of hosts is his name; and thy Redeemer the Holy One of Israel; The God of the whole earth shall he be called.”  Isaiah 54:5

The following scripture refers to the New Testament Body of Christ being the bride:

“For this cause shall a man leave his father and mother, and shall be joined unto his wife, and they two shall be one flesh. This is a great mystery: but I speak concerning Christ and the church.”  Ephesians 5:31,32

So in these two verses, we can see that the “bride” of Christ consists of the original branch – “Israel” and the “New Testament Church” in “unity” married as “one” body to Christ.

There is One Spiritual Israel

This concept is a mystery and can be difficult to grasp. The Church through the mercies of God is a “grafted branch” into the same tree as Israel.

In God’s eyes, the Church today will join spiritual Israel:

“But ye are a chosen generation, a royal priesthood, a holy nation, a peculiar people; that ye should shew forth the praises of him who hath called you out of darkness into his marvelous light:

Which in time past were not a people, but are now the people of God: which had not obtained mercy, but now have obtained mercy.”     I Peter 2:9,10

This is exciting brethren because the bride of Christ is “ONE” group of people, Israel and the church combined!!

Look what Ephesians says about us and how the church is the bride:

“Husbands love your wives, even as Christ also loved the church, and gave himself for it; That he might sanctify and cleanse it with the washing of water by the word,

That he might present it to himself a glorious church, not having spot, or wrinkle, or any such thing; but that it should be holy and without blemish.”  Ephesians 5:25-27

So here, the church is called the wife of Christ.

What About the Rapture?

Now, some of you are probably wondering, “What does this have to do with the rapture?”

Well, I explained this so that the rest of this lesson will make more sense. It is important to understand that the “resurrection” event is also a “WEDDING” event.

Folks, it is exciting that Israel and the Church “together” will be married to Christ when He returns.

Now, when we have weddings here on earth, we also have a time of celebration or a reception.  Depending on the culture there can be a “little bit of food” or “a lot of food.”  A wedding feast!

It is the same with God.

Some day soon brethren, when we are united and married to Christ at His return, He has promised to give us a wedding reception and feast to celebrate with Him. God calls it the “Marriage Supper of the Lamb” or “Wedding Feast.”

Error in The Church

Now here is where a false teaching and traditions of man have spoiled the truth of God’s Word.

And it is unfortunate, because I have heard this falsehood repeated over and over by ministers behind pulpits to believing Christians.

The sad part is that these pastors are supposed to be educated scholars of the scriptures. They should be accurately handling the Word of truth.

What am I talking about?

The fable that the “marriage supper of the lamb” will occur right after the pre-tribulation rapture and seven years before Jesus returns to earth.

Have you heard this? While the church is up in heaven at the start of the 7 year tribulation, “terrible trouble” will break loose on the earth. And while those that are “left behind” on the earth are suffering for 7 years, the Church will be eating the heavenly food of the “wedding feast”. 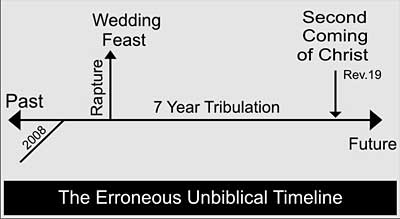 But friends, does the Bible really say this?

We cannot have any biblical beliefs if they cannot be found in scripture. Can we? So let’s see what the scriptures tell us.

At the end of the Book of Revelation, we find the “Second Coming of Christ.”

“And I saw heaven opened, and behold a white horse; and he that sat upon him was called Faithful and True, and in righteousness he doth judge and make war.” Revelation 19:11

Most of us have read this verse and can agree that this is the “Second Coming of Jesus”, right?

By the time that we arrive to this part of Revelation, the great tribulation is at its end. The arrival of Jesus will end the horrible time of the tribulation onEearth.But I want to draw your attention to something.

Let’s go back a few verses in Chapter 19 and read what it says. Precisely four verses sooner;

“Let us be glad and rejoice, and give honour to him: for the marriage of the Lamb is come, and his wife hath made herself ready.

And to her was granted that she should be arrayed in fine linen, clean and white: for the fine linen is the righteousness of saints.”   Revelation 19:8,9

Do you see that brethren? “The Marriage of the Lord is come.”  and, “His wife has made herself ready…”

Now here comes the truth that we cannot ignore. In this passage, we are told that “His wife, the bride hath made herself ready.”

In this portion of scripture, the “Bride” is finally ready. Which is taking place at the END of the tribulation period! We are in Revelation chapter 19. The Bride is not ready till Revelation 19. But we are given the fable by preachers across the country that the bride gets raptured in Revelation Chapter 4. That is absurd!

How did the bride become ready? By purging!

The only way this can be accomplished is by enduring the Great Tribulation, which means no pre-tribulation rapture snatched away the Christians seven years prior!

And now let’s look at the next verse folks, Revelation 19:9:

Do you see it? We just read that the time for the “Wedding Feast” or “Marriage Supper of the Lamb” is at the end of the tribulation!

When Jesus arrives on his white horse, the tribulation period will be finished and complete. And it is at the end of the timeline that we see the marriage supper mentioned and occurring.

So according to your Bible and my Bible… The “Marriage Supper of the Lamb” does not happen seven years prior to the return of Christ!

So now, I must ask an honest question folks. ”Why are pastors telling us that the wedding feast is seven years prior?”

I will tell you why, because the fable of the Pre-tribulation rapture is built on a “false” house of cards. And part of the fable needs the “wedding feast” to happen seven years prior to the “Return of Christ.”

But we just studied and read that it does not happen seven years sooner at the beginning of the Tribulation. So if the timing for the wedding feast is wrong for pre-tribulationists. The fable cannot stand!

I have often wondered why it is so hard for these ministers to believe otherwise!

I have observed that the doctrine of the pre-tribulation rapture teaching is held almost as high as salvation itself with some of these teachers.

Folks, there is so much deception out there and twisting of scripture, that it is no wonder the Church is in a state of immaturity and in need of purging.

But good news for us brethren, we are children of truth.  With the light of God’s Word we can be among the wise ones.

I pray that this lesson blesses you and helps you to understand this “Mystery of God!”

For those of you that are curious as to whether, preachers really do twist the scriptures about the timing of the marriage supper, Watch Mr. John Hagee do it before your eyes!