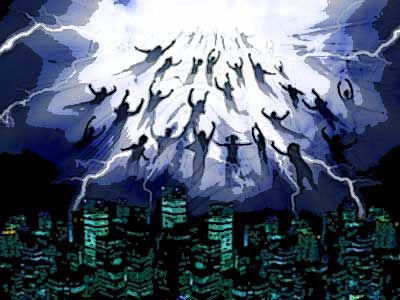 In this lesson, when I say the word “Rapture” I am referring to the Pre-Tribulation Rapture. This definition entails a future event where some believe that Jesus will remove all of the Christians off of the earth before the tribulation period starts.

The rapture, what is it? So many images come to mind don’t they? We have seen them in movies. Read about them in books, and heard preachers describing various “scary” rapture scenarios. Unfortunately, these popular images of the “rapture” are the cause of Christians not knowing the REAL truth about this subject.

What do I mean? Well let me explain. The “Rapture” is portrayed in people’s minds under a false point of view.  What point of view is that?

Before I answer, let me ask you a question.

If I were to ask you, “What is the reason for the Rapture?” What would your answer be?  What would most Christians say?

Most people would say that the reason for the rapture is so that Christians won’t have to be in the tribulation.

Based on this answer alone, the rapture doctrine nullifies itself! Why? Because people think that the reason for the Rapture is to escape pain and suffering.

By the time you are finished reading this lesson, you will see what I mean.

I will even go as far as to say this, “If you believe that the reason for the rapture is so that you will not have to face the pain and trials of the tribulation, then you are denying the main focus of the gospel of Christ!”

Strong words huh? I assume that I have your attention now!

It would take volumes to biblically explain in the long version, so I will try to teach this in a short version.

Okay, now that we have that out of the way, let’s begin.

In order to learn a doctrine, we cannot start in the middle. We have to start at the beginning.

“Therefore leaving the principles of the doctrine of Christ, let us go on unto perfection; not laying again the foundation of repentance from dead works, and of faith toward God, Of the doctrine of baptisms, and of laying on of hands, and of resurrection of the dead,..”
Hebrews 6:1

According to this verse, there are some parts of doctrine that everyone SHOULD be taught as baby Christians, and also SHOULD know. In other words a mature Christian should not be struggling with these basic things.

So I ask you brethren, how many of you have been thoroughly taught these basic things?

So there you go folks, a brief list of basics that the church HAS NOT been taught about.

For now, I want to focus on (# 5) “And of Resurrection of the dead…”  Now did you see anywhere on this basic list, the rapture mentioned? Which again, is the event to rescue Christians from the “mean” antichrist?  I do not see it!

What I do see is the word “resurrection”. What is the resurrection? Well, that one is easy. It is when dead people come back to life. Just like Jesus did.

By nature, humans are so foolish, blind and arrogant, including Christians. And Christians have the silly audacity to think that the rapture is about “Rescue”, no, no, no!

Brethren Jesus said that He was the “resurrection and the life” (John 11:25). Even though He died, he was raised. The hope of the gospel is for those that have died, that they might be raised to eternal life!

Do you see it yet brethren, our Lord has 6000 years of godly dead people that need resurrecting! So the “Rapture” is NOT about rescuing Christians from an unpleasant time period. In fact the word “rapture” is not in the Bible anywhere. I will tell you what IS in the Bible, the word “Resurrection!”

Do you see now why I said that if one thinks that the rapture is about rescue, then that person is denying the gospel? The gospel is about resurrection to eternal life, NOT escape from the tribulation!

So let’s go on. Now, if sometime in the period of mankind, God is going to resurrect all of His dead children to eternal life, common sense tells us that some group of living people will witness it during their lives.

Common sense also says that God will have to use a different plan for the living people. That plan of course would be that the living people will not have to taste death. So as an “icing on the cake”, after the big resurrection event of the dead, the living get to join them.

We Shall be Changed

The living will take part in the resurrection by having their bodies change to an immortal body.

“Behold, I shew you a mystery; we shall not all sleep, but we shall all be changed, In a moment, in the twinkling of an eye, at the last trump: for the trumpet shall sound, and the dead shall be raised incorruptible, and we shall be changed.” 1 Corinthians 15:51

So it is about resurrection, folks, not rescue!

Now that we know that truth, the next logical question would be, “When will the resurrection happen?”  What does the Bible say? We want truth, right brethren, not the words or traditions of men.

“For as in Adam all die, even so in Christ shall all be made alive, But every man in his own order: Christ the first fruits; afterward they that are Christ’s at his coming.”
1 Corinthians 15:22, 23

Several things are mentioned in these verses. First, there are only two groups of resurrected people.

All in Their Order

The other thing that is mentioned is that each is resurrected in his own “order”.

So the order is:

When does this happen? It also tells us, “at his coming.”

But where on the timeline does this resurrection happen? The Bible does tell us. Look at the next verse in that same passage:

So according to this verse, right after the resurrection, is the end. It did not say, “Then cometh seven years of tribulation!”

At the Last Day

There are more verses to confirm this timing.

“And this is the Father’s will which hath sent me, that of all which he hath given me I should lose nothing, but should raise it up again at the last day.” John 6:39

“And this is the will of him that sent me, that every one which seeth the Son, and believeth on him, may have everlasting life: and I will raise him up at the last day.”
John 6:40

“No man can come to me, except the Father which hath sent me draw him: and I will raise him up at the last day.” John 6:44

“So man lieth down, and riseth not: till the heavens are no more, they shall not awake, nor be raised out of their sleep.” Job 14:12

Could it be any more clear brethren? Our hope is the resurrection which will occur at the “LAST DAY!”

Now some could “weakly” try to argue that it means the last day before the tribulation starts.

Could the earth have the heavens being no more, but still have seven years added to it? Absurd!

Conclusion: Folks the Rapture is a fictional tradition of men. We should instead be referring to this event as the “resurrection as our hope”.