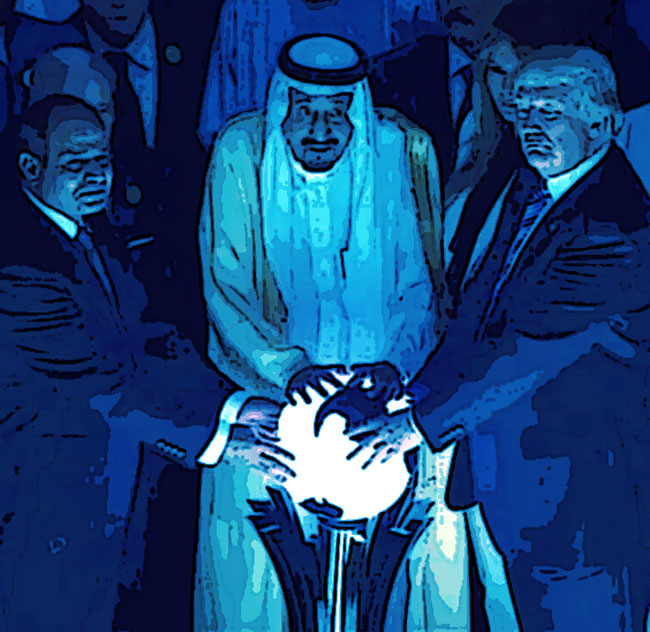 Trump and the Glowing Orb of Mystery 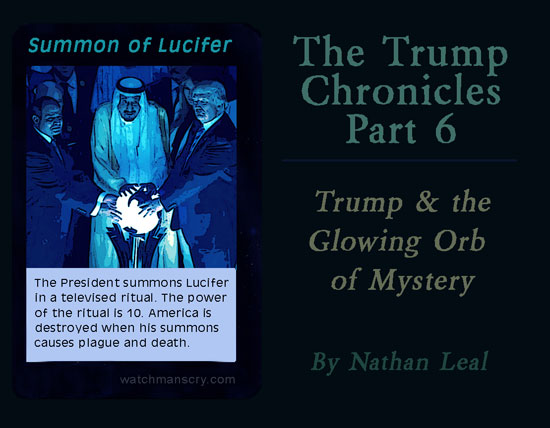 Over the past two years, I have researched the background of Donald J. Trump and presented my findings to the general public. I have done this because as a Bible believing Christian, knowing this information is vital.

Donald Trump is America’s president and his foreign-policy will determine the direction of America and her allies. His decisions will also play a role in Bible prophecy. Therefore it is important to know the truth about him. Not just for political purposes, but rather, to compare his actions with end time prophecy.

Doing this is an exercise in wisdom and it is also required for all Christians.

Jesus told us to watch. This means we must examine world events, and keep a discerning and watchful eye on those who are in leadership. This includes America’s president.

So are you doing that my friend?

This discipline is not easy for supporters who are committed to him, because some of them believe that his place in history is to destroy the New World Order, tame Washington, and bring a reprieve to America.

There also others who have been convinced by confused watchmen that Trump is a divine visitation who has been sent by God to perform ALCHEMY on America, Washington, D.C., the church, and turn it all into gold.

But believing in something and watching it happen are two different things.

Donald Trump is the president, and his agenda is showing. And instead of destroying the New World Order, he is nourishing it.

“HOLD ON, Nathan, Trump is keeping his promises! He just jumped ship on climate change. What about that?”

That’s true. He did jump ship on the Paris Climate Deal. It was a horrible policy. 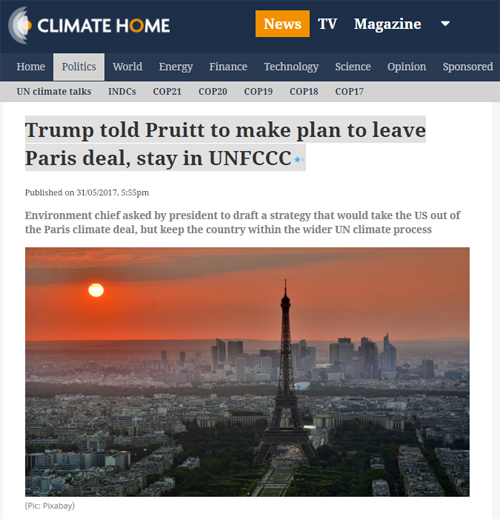 Therefore, I consider his recent maneuver to leave the Paris Deal a ruse. At first appearance, pulling out looks good and makes conservatives happy. But there is more to this maneuver than meets the eye.

The Hydra Hides Behind Paris

One of Trump’s motives for pulling out of the Paris Deal was to be a DISTRACTION! It was to take the eyes of people away from the scandals that are brewing and the inauguration of a New Hydra Monster of Global Surveillance in the Middle East. 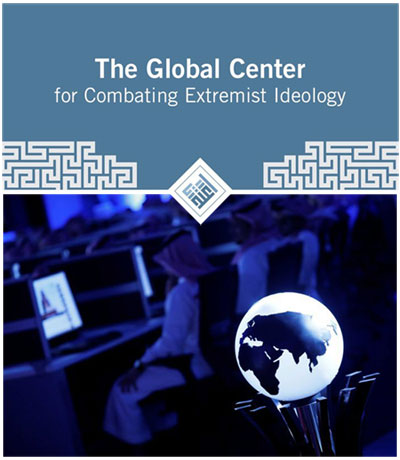 The new surveillance location has the elite of the New World Order slobbering with glee, because it will extend the eyes of Big Brother to locations that were once in isolation, but now thanks to Trump’s commencement, can no longer hide.

“Hold on Nathan, this new surveillance operation is to fight terrorism! They said so.”

Is it folks? Is that all it is? The name of this Hydra says it all…

Make note of its location – Saudi Arabia. The Saudis are the creators of terrorism. They operate under Sharia Law. And their new Command Center will allow them to listen in on the world, and determine if the speech or ideology is radical or extreme….

This new location will serve the NSA and is going to bring persecution to Christians in the Middle East. It will allow the custodians of Sharia Law to spy on everyone. Not just in the Middle East, but worldwide.

And the sad part about it is that Donald Trump endorsed it. And through him, the Klingons of the NWO have found a representative and pawn who is going to shape planet earth to their liking.

Ladies and gentlemen, Donald Trump was placed in office by the globalists and the neocons that he claimed to be against. How can I say this? Because he is presently advancing the Neo-Con agenda while many evangelical Christians cheer him on.

1. Bomb Syria
2. Pick a fight with Iran, and North Korea,
3. Arm Saudi Arabia
4. Reoccupy Iraq and send a troop surge to Afghanistan
5. Bomb and invade various Muslim countries.
6. Create a new terrorist group. Watch for a new version of ISIS to show up.
7. Award mercenary contracts to Blackwater and DynCorp.
8. Create an American war machine juggernaut and arm it with a host of weapons.
9. Loot oil from the Middle East.
10. Create false flag terror attacks in America and throughout the West.
11. Feed and grow the hydra beast of the New World Order.
12. Oh…. and crash the dollar.

This list is just the beginning of the neocon agenda. How interesting is it that Donald Trump is following this script to a “T.” 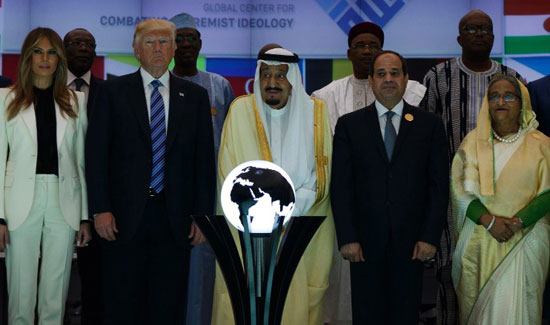 When Donald Trump went to Saudi Arabia, he participated in a ritual that looked like something from the Illuminati card game, or a comic book, or graphic novel involving superheroes and villains. 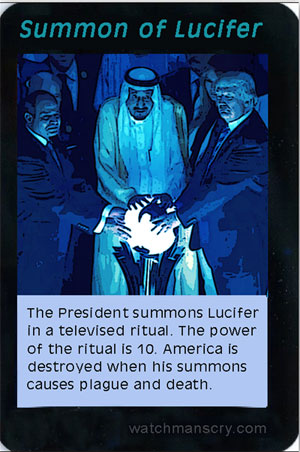 Now before any Trump surrogates get offended with the card I made, please read the rest of this report. Because the new surveillance location will indeed be used by Lucifer to spy on free citizens, including Christians, which will lead to their arrests and persecution.

The WEIRD RITUAL consisted of Trump placing his hands on a globe that had a light inside of it. When they fired it up, it glowed like an orb from a fairy tale. 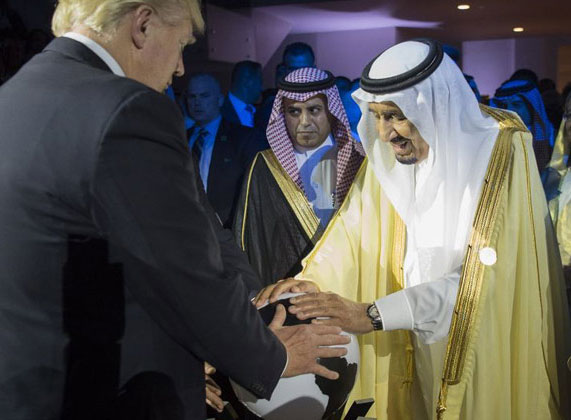 He did this alongside the King of Saudi Arabia and the President of Egypt. 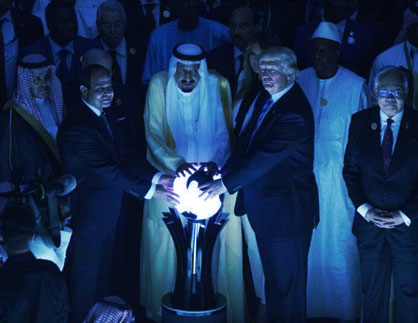 But what was that all about? It sure looked weird. A lot of people have wondered about it.

The Bible tells us in Revelation chapter 13 that in the end times, the Beast Creature will be able to monitor the citizens of planet earth. Today we are witnessing the rise of America’s spy voyeur machine AKA the NSA and her Western counterpart like “Great Britain’s / MI – 5”

What does this have to do with Trump’s shiny orb ceremony?

Everything! Because the ceremony was the inauguration of Saudi Arabia’s new spy agency called the “Global Center for Combating Extremist Ideology” which will monitor global conversations on the Internet and social media. It is located in the Saudi Arabia’s capital city – Riyadh.

And get this, they will be watching for conversations which include, in their opinion, extreme or religious viewpoints.

On the surface, it sounds good. Some may say, “Yay, Saudi Arabia is clamping down on terrorism.”

But in reality, this agency will monitor all conversations, including Christian conversation, and determine whether the words are extreme or fall within ideology that is forbidden. But who determines the boundaries of ideology? Saudi Arabia is a Muslim country and operates under Sharia law by absolute rule by the monarchy of the Saudi royal family.

Saudi Arabia is one of the worst countries for human rights abuses. Prisoners are flogged and often receive between 1,000 to 2,000 lashes for crimes involving freedom of expression. 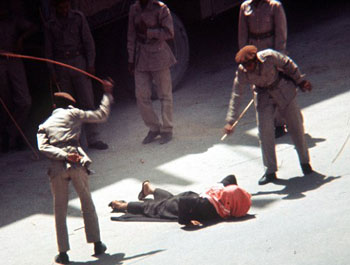 Saudi blogger Raif Badawi, was jailed for “insulting Islam”, and received a verdict of 1,000 lashes, and ten years in prison.

This new system to spy on their citizens is an anti-Christian dream for Saudi Arabia. 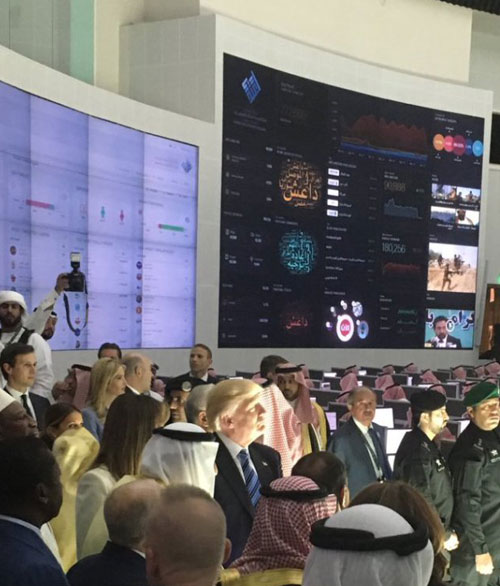 It will allow the Saudi government to infringe on the privacy of Christians throughout the Middle East. 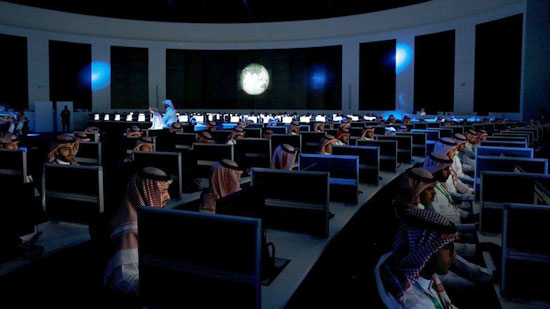 They now have all the listening devises of the NSA…. 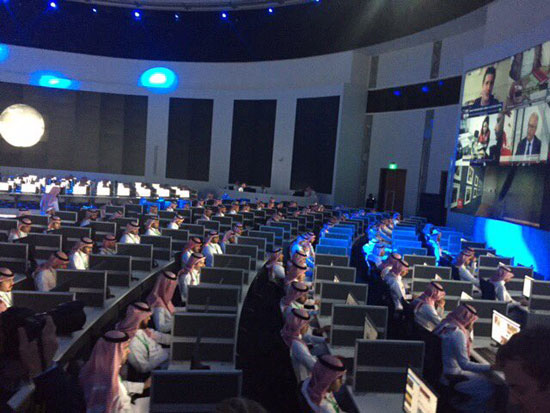 …To monitor anyone who communicates with RADICAL IDEOLOGY. Which according to them includes Christianity or freedom. 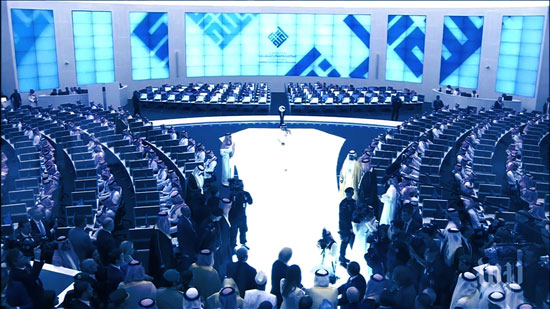 …and bust their doors down for speaking against Allah. 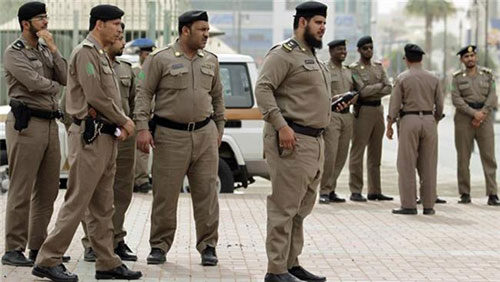 A future nightmare against Christianity was inaugurated by Donald Trump when he placed his hands on the glowing orb with two Middle Eastern heads of state who are butchers of their countrymen.

The Saudi King was one of the guys. But the other one is even worse.

His name is Abdel Fattah el-Sisi, a U.S. puppet and president of Egypt who took over his country through a coup in 2014. 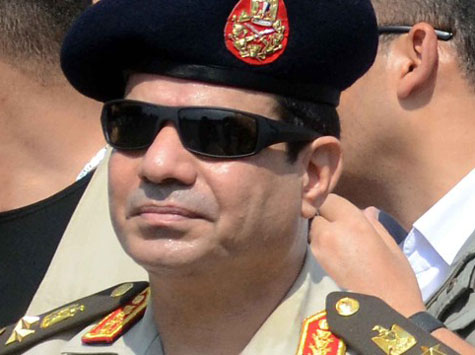 One of his first actions as the leader of Egypt was massacring 1000 peaceful protesters who were assembled to protest his coup. 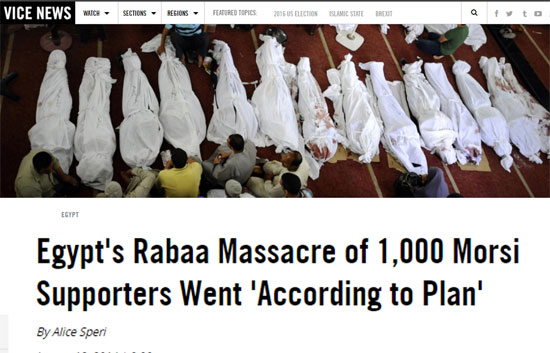 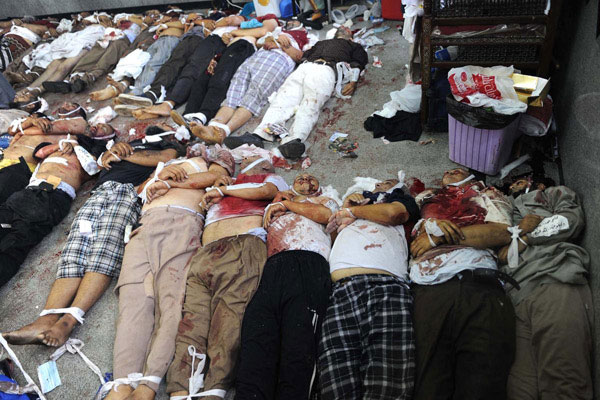 How interesting is it that a dictator who butchered 1,000 of his own citizens is PRAISED by Trump.

“We agree on so many things,” Trump said of the man who is holding an estimated 50,000 political prisoners. 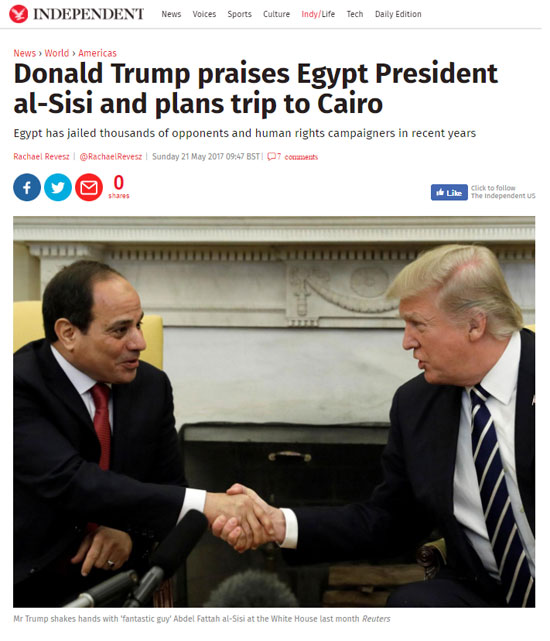 Does anyone else find Trump’s praise of murderous dictators disturbing? I find it appalling. But I digress…

Al-Sissi is a puppet of the American Federal Reserve of Corruption. And he sealed the deal when he did what all American puppets do, he took out an IMF loan for 11 billion dollars and hocked Egypt. This is also why Trump loves him. 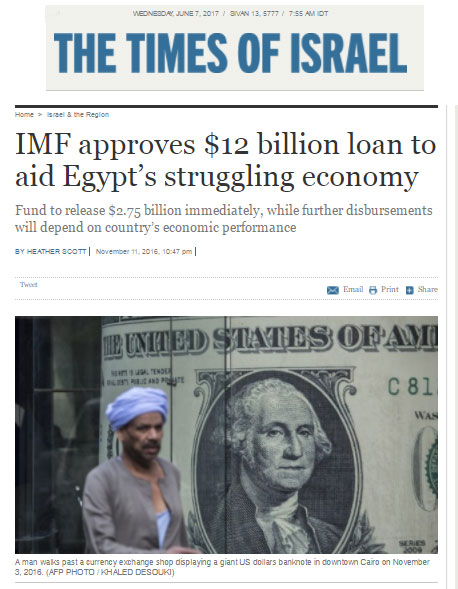 This is insanity folks! Trump just met with two of the worst leaders and abusers of human rights and endorsed their command center to spy on free citizens. Why would he do this? Will this make America great?

Trump campaigned with the message that we cannot trust Muslims, but then he turned around and approved that they have this ability?

Let me say this now, I can already see that this facility will be used in collusion and in ways that we never imagined. It will be used by the NSA to bypass FISA COURT requirements for warrants against American citizens. All the NSA has to do is make a phone call to this facility and have the Saudis do their spying for them. And then for the official record, say, “We received an anonymous tip.” This is a backdoor tool for spying on Americans and western citizens and Trump loves it.

The facility will also be used to gather intel for false flag terrorism that will be sponsored by America and the Saudis. It will allow the Muslims an ability that they never before imagined, to wreck havoc on the West. It will use 21st century technology to take terrorism to the next level.

The New World Order Beast just grew a new appendage and it will be located in the Middle East. It will be used to spy against Christians and proponents of Middle Eastern freedom.

How ironic is it that Saudi Arabia, who funded the attack of September 11, has now been given a major tool that will be used for future terrorism.

Donald Trump campaigned against Islam, and within four months of him becoming president, he christened a terrorist command center in Saudi Arabia and shook hands with the Great and Terrible Oz of the Middle East.

How many of the other watchman out there are grieving about their endorsement of Trump? Not many. Instead, most of them are still making excuses. But this watchman will not be guilty of that.

Fasten your seat belts folks. And get your hearts right with God. There is great darkness coming. And we are watching the pieces fall into place before our eyes. Unfortunately, most people cannot see it. Please do not be one of the blind ones. This article presented proof that things are not as they appear.

In the next installment, we’re going to examine how Trump found integrity in the attic, and covered it with gold.

Share this article with your friends and family. If you appreciate our efforts to bring you the truth, we appreciate your support.