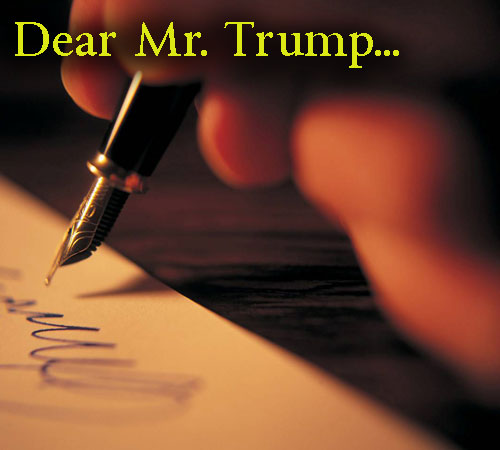 (Attention Readers, If anyone has the ability, please get this letter to Donald Trump ASAP)

Dear Mr. Trump, if you want to win the election, please read this.

I am a citizen of the United States. I am a Christian, and I am a father with a wife and children. I want a future for my kids, just like the rest of the country. If Hillary Clinton becomes president, this country will be over. She is corrupt. She has been bought off by special interests, and she is going to bring World War III.

I do not want this.

So it looks like you are the only other viable choice to stop her madness. Thus far, I am not impressed with you. You are egotistic, bombastic, narcissistic. You struggle with telling the truth. And you appear to have a lot of anger. That being said, you are the only candidate who has a chance at stopping Hillary.

But right now you’re in trouble. You are struggling in the polls, and a lot of people are not sure about you, including me. They are perched on the fence trying to decide if you are the “real deal.” Time is running out. If you are going to change the opinion of those who doubt you, you must do it quickly.

Time is running out, Mr. Trump.

I don’t know whose advice you are following to try to expand your support, but it is failing. Your rallies may be fun and energetic, but most of those attending are from your primary base of support. You need to expand and gather the undecided. And one of the largest pool of potential voters are the evangelicals, and women.

If you desire to become president, you need the evangelical vote. I am an evangelical Christian. I believe in the Bible, in morals, and in God’s principles. Therefore, you need my vote. And you need the vote of my brethren who are doubting you.

When the 2005 tape was released about you and Billy Bush, you lost a lot of supporters. A portion of the evangelicals have terminated their support of you.

So have a lot of women.

Mr. Trump, you cannot win the election without the support of women or the evangelicals. Therefore, if you want to win, you need to turn this around.

I do not know where you received the counsel on the apology that you tweeted and later videotaped, but the strategy was terrible.  The apology lacked sincerity and included elements that should have been left out. It did not impress. Instead, it caused you more harm and resulted in a mass exodus of support from your campaign.

However, you can fix this. But it has to be done quickly and correctly.

A few months ago, you formed an evangelical committee of advisers made up of preachers and spiritual leaders. Did any of them advise you about how to deal with the tape? Was your apology scripted by one of them? If it was, it was poorly done, because your method of apology failed to stop the exodus, and lacked the contrite fundamentals that evangelicals understand and that Americans wanted to see.

Conclusion, you need to do something different to win the election and it needs to be compelling. But it also has to be genuine to win back the support from the evangelicals and women who are on the fence.

So here it is. And I need to stress, if you want to win, this must be done.

If you choose to ignore this admonition, you may lose the election. If you consider this counsel and act on it, your odds of winning will greatly increase.

Number one – the Language of the Evangelicals

Mr. Trump, Christians have a language. It is a part of our culture. At our core, we believe in forgiveness and redemption. But obtaining redemption requires a fulfillment of fundamental guidelines.

The Bible narrates many accounts of people finding redemption. But it also reveals that those who did not follow the guidelines perished.

Judas Iscariot is an example of a person who did not find redemption. He was regretful. He was embarrassed. But he did not deal with his betrayal of Jesus correctly, and thus he perished through self-destruction.

Peter denied Jesus, but dealt with his downfall with tears and repentance. He was humble. He was not only embarrassed about it, but it broke his heart, because he realized that his failure hurt somebody else. The Bible tells us that he wept bitterly.

Mr. Trump, repentance requires humbleness and responsibility. It does not make excuses. It doesn’t shift blame. It doesn’t point the finger to someone else.

When you sent your tweet to apologize about the tape, you made excuses. You did not, “own it.” You blamed Bill Clinton. Later that night, you released another video that did the same thing, and your face showed defiance. That was a mistake. Because it resulted in an exodus of women and evangelicals who could have placed you in the White House. The reason for the exodus was your inability to show evangelicals that you understand our language.

Christians want to trust you. They also want to be confident that you understand redemption. They want to see you as a man of integrity and as one they can trust.

Mr. Trump, please try to understand this, the best example of integrity and character, is a person who is able to show responsibility and humbleness.

As Christians, our lifestyle includes forgiveness and forgiving. However, we are also taught by Jesus that we will know an imposter by their behavior or “fruit.” Therefore, we are instructed by God to be cautious of those among us. This includes you, Mr. Trump. American evangelicals and women want to trust you. But so far, your behavior is making that difficult.

Sir, be that man that we are looking for. Show us that you understand humbleness and meekness. You stated in your video that traveling around the country has humbled you. That’s nice. But true humbleness occurs through action. Not just words.

You stated in the debate, that the tape was, “just words.” But sir, those words have caused millions of people to doubt you. Also, one of the reasons that many women have abandoned you, is because the tape hinted that you have sexually assaulted women in the past.

Here’s the uncomfortable truth. Millions of women have been molested and raped in America. This has also happened to boys. When your tape came out, it brought back a lot of memories to those victims.

In your first two apologies, the pain of sexual assault was minimized and reduced to, “locker room talk.” Unfortunately, the survivors of sexual assault feel differently. And your sidestepping method made light of their pain.

Number two – Apologize to the World. This time No Excuses

Show us where the buck stops. Prove to us that you are a different man.

I counsel you to speak to the American voters with a sincere video and apologize correctly. Tell the women who were reminded about assault that you are sorry that your Access Hollywood tape brought pain to them.

Admit that it was wrong. Do not say, “IF” I offended anyone.

Admit that it “WAS” offensive.

Make a public statement about sexual assault and molestation. Validate the pain of millions out there who are dealing with this.

Be that man Mr. Trump. Be the man of character. Be the man that understands what true repentance is.

If you look to the polls, you may be getting worried. You should be. It should be humbling to you. It should let you know, that you are not perfect, but guess what Mr. Trump. We already know that, because as Christians, we understand that none of us are.

But the good news is that America is based on Christian principles. And American citizens understand forgiveness. We will forgive you. Women will forgive you. But show us that you want it, and show us you are capable of humbly seeking it.

Time is running out, Sir. But a miracle can still happen.

And I believe that I speak for millions of evangelicals, who want to go into the voting booth and choose Donald Trump for president with confidence. In order for that to happen, you need to do take this advice and apply it quickly. In so doing, you will settle a lot of hearts and if it is God’s will, you will find yourself pleasantly surprised.

(Attention Readers, If anyone has the ability, please get this letter to Donald Trump ASAP) 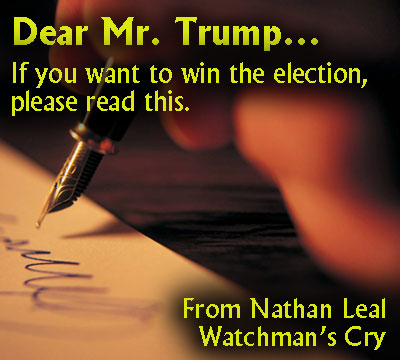