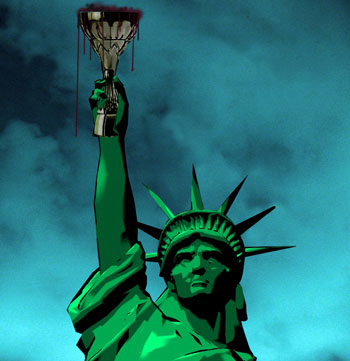 At one time, America was mighty. She was a beacon of hope for a tired world. She represented freedom, liberty and a heritage that feared God.

…But that was the past.

America is now on the road to destruction. This has been prophesied in Scripture. But the prophecies were spoken as a mystery.

To him that has the eyes to see…

The Statue of Liberty

The Statue of Liberty is one of the images the represents America.

By the way, for those who will argue that the statue is pagan, yes folks, I agree. But she stills represents several things for America.

Inside the pedestal base of the statue is a poem mounted on a plaque. 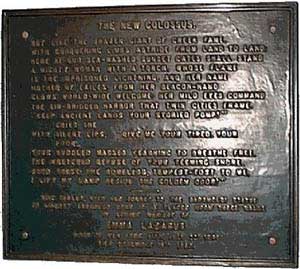 Not like the brazen giant of Greek fame,
With conquering limbs astride from land to land;

Here at our sea-washed, sunset gates shall stand
A mighty woman with a torch, whose flame
Is the imprisoned lightning, and her name
Mother of Exiles.

With silent lips. “Give me your tired, your poor,
Your huddled masses yearning to breathe free,
The wretched refuse of your teeming shore.

Send these, the homeless, tempest-tossed to me,
I lift my lamp beside the golden door!“

The above poem defined America in her youth.

I find it interesting that many of the terms used in the poem have a similarity to Mystery Babylon when we look into the Scriptures.

Most end time Bible scholars have defined old Babylon – (Iraq) as the future fulfillment to end time Babylon. But an examination of the prophecies about future Babylon and Iraq reveal that they are two separate entities.

In Jeremiah 50, we can see that there are two Babylon’s in prophecy.

The first one is a reference to Jeremiah’s time and the second Babylon is a future reference.

“For out of the north a nation comes up against her,
Which shall make her land desolate,…” Jer. 50:3

The verse above prophesies about one nation invading her. This was fulfilled in 539 B.C. when King Darius of Persia invaded and defeated them.

But then we have another prophecy that refers to a different invasion event for Babylon.

“For behold, I will raise and cause to come up against Babylon,
An assembly of great nations from the north country,
And they shall array themselves against her;
From there she shall be captured.
Their arrows shall be like those of an expert warrior;
None shall return in vain.” Jer. 50:9

This is clearly a prophecy about a different Babylon. because the attack on her will include MANY NATIONS. Thus, this is not the same event that we read in Jer. 50:3

…but who is it talking about?

Let’s look at more prophecies about the end time Babylon.

The Daughter of Babylon

Isaiah 47 has many prophesies about end time Mystery Babylon. She is referred to as the “Daughter of Babylon.” This means that she is a descendent.

“Come down and sit in the dust,
O virgin daughter of Babylon;
Sit on the ground without a throne,
O daughter of the Chaldeans!
For you shall no more be called
Tender and delicate.” Is 47:1

Make note that in the reference above, she is a DAUGHTER!

“Your nakedness shall be uncovered,
Yes, your shame will be seen;
I will take vengeance,
And I will not arbitrate with a man.” Is. 47:3

I submit that these prophecies about the DAUGHTER of Babylon are about America. The above verse says that she is full of hidden evils. But in the end, God will expose them.

“Sit in silence, and go into darkness,
O daughter of the Chaldeans;
For you shall no longer be called
The Lady of Kingdoms.” Is. 47:5

In the Colossus poem that is embedded in the base of the Statue of Liberty, America is called:

“The Mother of Exiles…” – This term lines up with the biblical reference – “Lady of Kingdoms.”

The references used in the poem line up with the prophecy of Isaiah 47:5 quoted above. But it does not stop there.

The Colossus poem makes reference to the words: “gates” and “doors.”

In Jeremiah 50 & 51, several details are revealed about the end time Daughter of Babylon.

“The broad walls of Babylon shall be utterly broken,
And her high gates shall be burned with fire;
The people will labor in vain,
And the nations, because of the fire;
And they shall be weary.” Jer 51: 58

The mighty men of Babylon have ceased fighting,
They have remained in their strongholds;
Their might has failed,
They became like women;
They have burned her dwelling places,
The bars of her gate are broken. Jer. 51:30

The verses above are not biblical poetry. They are prophecies about the judgment that will someday strike America.

Why will this happen? Because America has turned away from God and poisoned the whole earth.

“The kings of the earth who committed fornication and lived luxuriously with her will weep and lament for her, when they see the smoke of her burning,… Rev. 18:9

How did the merchants become rich? America has the highest GDP on the planet meaning, she buys goods from the rest of the world. And she export her ways to the world as a culture of lust and greed.

For these sins, she shall be repaid double when the final restraint of God’s mercy is removed. Don’t let it catch you off guard my friend.

Be watchful. Repent if need be and occupy till He comes.