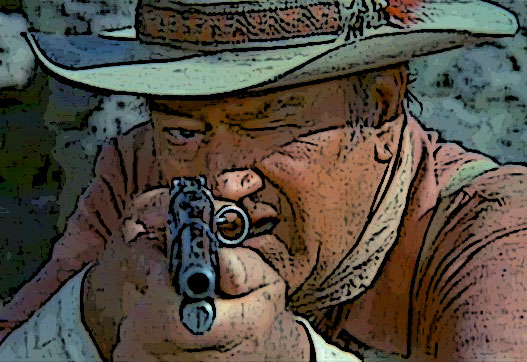 Self-defense: Are you a John Wayne or a Pacifist?

Is there a happy medium? Can a person have a little of both inside of them? In this article I want to examine these matters and visit both sides of this debate. Experience has taught me that this topic is a can-of-worms.

I know Christians that insist that being a pacifist is the only way to live a Christian life. And I also know self defense proponents that believe otherwise.

While both of these viewpoints are polar opposites, the one thing that I have noticed in these two camps is that both sides can become very passionate and angry with those that disagree with them. I have watched members of both sides act very unkind and unchristian to those with the opposing point of view.

Why am I writing about this? Because I have witnessed this whole matter first hand. There seems to be a rumor on the internet that I am a pacifist. For the record, this accusation is untrue. I am not a pacifist.

But false accusations aside, I find it very interesting that some people who consider themselves a “John Wayne” type of remnant believer, conclude that if I was a “pacifist,”  then my entire prophetic warning message is nullified. Apparently, in the eyes of some, if an individual is a pacifist, they cannot hear from God.

But is this rumor true? Why do some people think that I am a pacifist? It stems from an article that I wrote back in January 2009.

In that article, I talked about a scenario.

According to the book of Revelation; during the great tribulation, the saints of God are going to be persecuted and delivered up to captivity. Jesus told us in Matthew 24 to flee to the mountains when these things happen. This means that during the tribulation, in order to survive, the remnant of God will need to hide in many places, including fleeing to the mountains and going underground as a church.

The Bible is very clear that during the three and one half years of the great tribulation, the serpent will be allowed to overcome the saints. So the sobering truth about this matter is that Satan will be given authority to kill the saints of God during this time period.

What else does this mean? It means that the remnant of God will not be able to defeat the armies of Satan during this dark season.

And this is the main point that I was trying to reflect in my old article. It visited the possibility that if you found yourself in the tribulation period and the armies of the NWO Beast were surrounding your house, and knocked on your door to arrest you, you would then have one of two choices.

Now before I list the two choices, if anyone of you found yourself in this scenario, it would be too late to flee! Why? Because they would be surrounding your house!

Again, for those that do not know how to read, or who like to jump to erroneous conclusions, I am qualifying this scenario…. This scenario is during the great tribulation!

So back to the situation, if it was:

You have two choices!

1. Go out in a blaze of glory! This means that your slam your door in their face, and allow your property to go under siege like David Koresh did! Side note – doing something like this during the future tribulation period will not make them leave. Quite the contrary, this would give the NWO Beast soldiers an excuse to use your house as target practice for their guns and heavy artillery. Common sense tells me that if someone were to do this, they will end up in heaven very quickly!

2. Surrender and hope for the best! So this leaves a second choice. While it is true that surrendering and going along peacefully into captivity is very unpleasant and unpredictable. It is the only other option.

The two choices that I have just mentioned have nothing to do with being a pacifist or an NRA patriot. They have to do with reality and basic math.

Also, the two choices are actually written in the book of Revelation 13:10

For the record, I do not believe that we are in the tribulation period.

Let me say that again, at this moment in time, we are not in the tribulation period!

The point that I was attempting to make in my old article was that if we were ever faced with this situation, we will all have a choice to arrive in Heaven as Rambo or as a martyr like the disciples. Unfortunately, many people do not like to read. So my article was taken out of context and summed up that I was encouraging people to willingly go to camp FEMA.

Jumping to foolish conclusions serves no fruitful purpose in the body of Christ. It also results in erroneous slander.

“He that answereth a matter before he heareth it, it is folly and shame unto him.” Proverbs 18:13

Conclusion: This messenger of God was slandered on the internet and over the airwaves!

Also for the record, I am not against free citizens protesting tyranny! The present freedoms of the United States are the fruit of individuals who were willing to stand up to tyrants.

For those of you that are curious on my position of self-defense, I will be concise with my answer. I believe that it is the duty of a father and husband to protect the lives of his family. I believe that it is their duty to protect their innocent children from thugs, criminals and anyone that would seek to harm them. The measures that I would use to accomplish this, I will leave to your imagination. But the measures would have to be on a case-by-case basis.

Also, as an American citizen, if I ever had to face foreign invaders or tyrants, I would seek to resist them. Or perhaps flee from them. (In the tribulation period. Tribulation=flee!) My method of resistance would be derived by seeking the wisdom of God and coming to terms with my conscience. Again, the measures that I would use would be on a case-by-case basis.

In other words, there are no “blanket” answers for all of these scenarios. If we are truly the children of God, then facing and dealing with these issues need to be done with the wisdom of God.

The Need for Wisdom

Is violence always the answer? No! But being wise and shrewd is! Staying under the radar and low-key would also be wise.

“Follow peace with all men, and holiness, without which no man shall see the Lord.”  Hebrews 12:14

Follow peace with all men? This statute seems to be at odds with some patriot wannabes that cannot wait to fire their weapons! This is unfortunate but I realize that it is also a reality.

And because of this sad reality, I do see a violent uprising in America’s future. The glamorous romantic fantasies of armed revolt that many patriots eagerly await will be replaced with a nightmare of blood where brother will be fighting against brother.

So fighting for freedom does play a role in the course of a free society. If by chance we are not in the end times, and tyrants take over America, then it will only be through the exploits of brave men that future oppression will be stopped.

The thing that concerns me in this matter is that many sincere patriots may be listening to very influential voices which do not encourage them to seek the wisdom of God. What kind of wisdom; the rules of engagement! Bubba needs to be told that victory comes through wisdom!

Some influential voices are not qualifying their inspiring words with the caveat to seek God in these matters.

Also some influential voices are not encouraging the patriots out there to weigh their future actions with Scripture. Bubba is not being told that it might be better to holster his weapon and say a prayer. Wisdom cries from the housetops! Is anyone listening?

The question is not really, “Is armed revolt necessary?”  American history confirms this.

The real question should be, “As a Christian, what attitude should I have?”