The Breaking of the Seals has Begun! Genocide of earth is Upon Us!

On April 29th 2021, the Lord revealed something huge to me. After I saw it, I was not quite sure how to disclose it, but this information is so pivotal, I have no choice, but to share it with the body of Christ.

Based on this finding, I believe there is a very, very, high probability that the breaking of the seals of Revelation has begun. Therefore, I am going to navigate with the perspective that the Seals are opening in real time. This is a watershed event, because this also means that the end time Tribulation period has begun, and my friends, the consequences of this are going to be very profound.

I can’t stress this enough, the world is going to be unrecognizable very soon, and the heartache, grief, and sorrow that is on the horizon will be unprecedented in man’s history.

By the way, this disclosure is not meant to be foster sensationalism. Instead, it is meant to share the truth of “what time it is,” and challenge everyone reading this to prepare for a very dark future, because if you are a Christian, your responsibility is to endure to the end. You must my friend.

I ask that all of you reading this will prayerfully consider the information, because if it is true, and I do believe it is, things are about to get very, very bad.

When I say very bad, I mean, millions of men, women, and children are going to die all around the world!

By the way, make note folks, if the seals are being broken and the body of Christ is here to observe it, this means the pre-tribulation rapture did not happen. And it also means that we, as God’s people must get up to speed on the events that are before us so that we can understand, navigate, and endure the night that is approaching.

So with that, I will present my findings. On Thursday April 29th, 2021, I was preparing to be a guest on Dr. June Knight’s program. About one hour before I was scheduled to go on the air, I was talking to God, and I asked Him to show me something that I could share on the show.

He immediately answered. The Lord told me to go to the Book of Revelation and look at the Four Horsemen. I obeyed.

I began to read about the first Horseman in Chapter six. I was then prompted to look at the original text in the Greek. I looked at each word in verse 2.

“And I saw, and behold a white horse: and he that sat on him had a bow; and a crown was given unto him: and he went forth conquering, and to conquer.” Rev. 6:2

Traditionally, Bible scholars have attributed the white horse to mean the Antichrist. The scholars have pointed out that the rider has a bow, but no arrow. Therefore, they assess that the rider doesn’t have arrows, because deceptive peace is his weapon, therefore the passage must be talking about the Antichrist who is using peace to deceive and conquer the whole world.

However, the problem with that theory is that it requires a suspension of common sense and trespasses the laws of spiritual boundaries, because the son of perdition is a human, and humans are not permitted to go beyond our natural boundaries of the flesh. In other words, a human could not ride spiritual horses from Heaven’s throne room. Nor could a human ride alongside the Grim Reaper and approach the earth from another dimension.

Therefore the Four Horsemen of the Apocalypse cannot be human. Nor can we claim with logical objectivity that three of the horsemen are spirits, but one of them is a human.  And while the Bible is not entirely clear about who the horsemen are, we do have a glimpse of them in the book of Zechariah chapter 1.

“I saw by night, and behold, a man riding on a red horse, and it stood among the myrtle trees in the hollow; and behind him were horses: red, sorrel, and white.

Then I said, “My lord, what are these?” So the angel who talked with me said to me, “I will show you what they are.”

And the man who stood among the myrtle trees answered and said, “These are the ones whom the LORD has sent to walk to and fro throughout the earth.” Zechariah 1:8-10

Based on the description in the passages above, they are watchers, and spirit entities.

Conclusion, during the tribulation, the Horsemen are spiritual entities / destroyers sent from God to judge and punish the earth.

Some of you may be familiar with that theory I mentioned above, but I want to present what I discovered, which I believe is a more accurate assessment of the original Greek text.

My friends, what I’m about to show you is evidence that demands a verdict, but as you see the information, the verdict will speak for itself.

To explain this, I must include that I am a very strong proponent of using the word study method of studying the Scriptures. This means that in addition to reading the verses on the printed page, I also incorporate looking at the word etymology in the original text.

Thanks to the website, “blueletterbible.org,” this is possible for anyone to do. Blue letter provides a variety of tools, including original word definitions, glimpses of the original Greek in the Textus Receptus, the Greek Lexicon, definitions from Strong’s Concordance, and more.

For your convenience, I’m going to provide screenshots that exhibit  Blue Letter Bible’s tools to share my findings.

My discovery began with Revelation Chapter six, so I opened it in Blue Letter Bible. 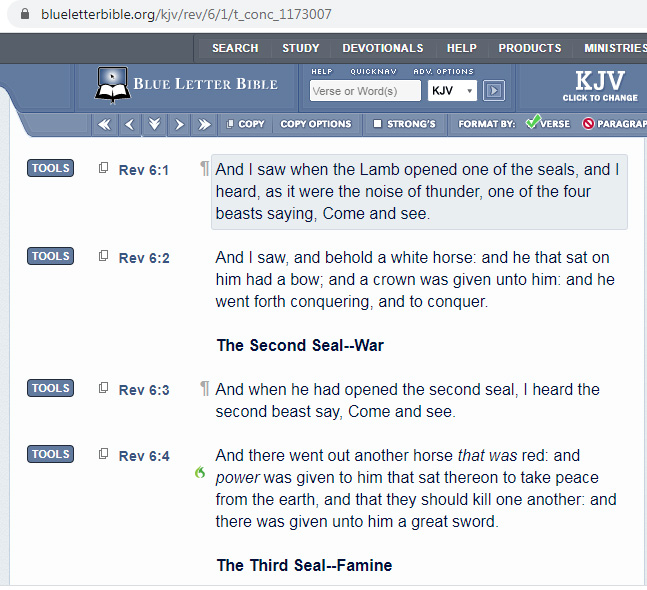 When I got to verse two, I was prompted to look at the original Greek word for, bow.”

To examine the original words, I clicked on the reference number next to the verse. 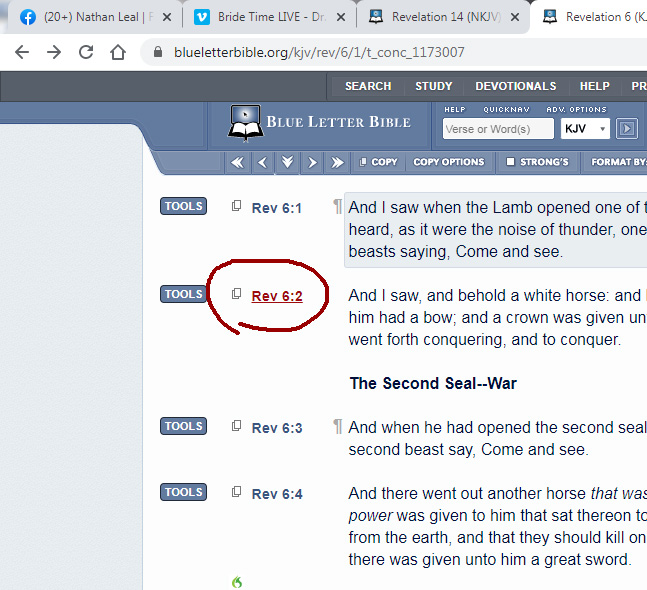 I scrolled down to the word for “bow.” It said that the Greek word was indexed as Strong’s Greek Word – G5115. 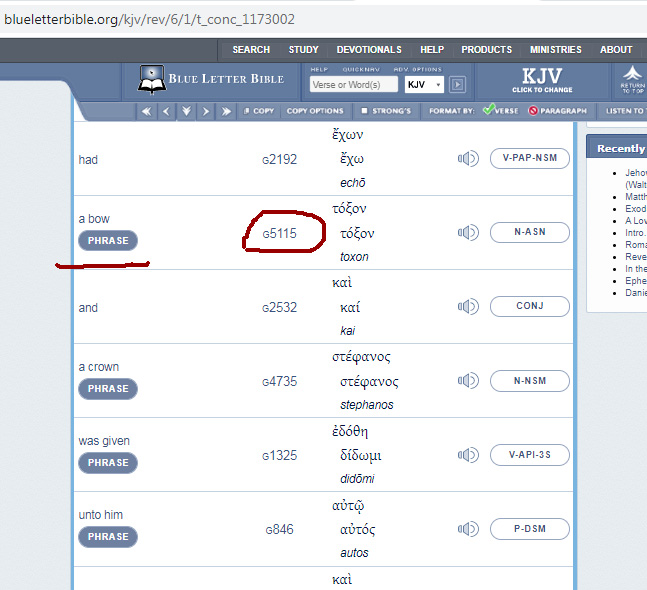 I Clicked on G5115. It opened up to Strong’s reference notes for that Greek word. As you can see below, it is the word – “TOXON.” 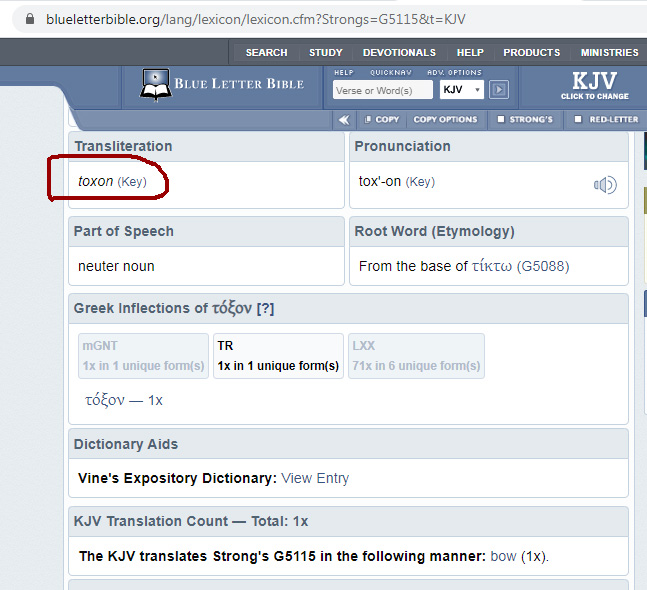 It was interesting that the definition from Strong’s with ambiguous, and limited to the word bow. However, I felt in my spirit that I needed to go deeper, so I went online to search out that word. The information I found is below.

As you can see, the word etymology for, TOXON, means, ” an arrow dipped in poison.” Over time, the word TOXON evolved into other words that are similar, i.e. toxic.

Ladies and gentlemen, this is very pivotal because it means that the first Horseman of the apocalypse conquers the world wearing a crown and poisoning the earth with arrows that are tipped with a toxic mix.

With all of that said, allow me to present what this means in layman’s terms.

The coronavirus was named because the virus is covered with protein spikes that resemble crowns. Thus, scientists call it the Corona, or crown virus.

In his hand he is holding an arrow that is dipped in poison. Do you see it folks?

This is the vaccine syringe that resembles an arrow. But this syringe does not have a healthy medicine. Instead, it is a poisonous vaccine that will kill a large portion of the population. And it gets worse, this means that the pandemic and also the poisonous false vaccine remedy is a part of end time Bible prophecy. Sadly, this event brings the commencement of the biblical tribulation period.

Let me say that again folks. The tribulation period that we find in the book of Revelation, begins with a “destroyer spirit entity,” who conquers the world with the Corona-crown pandemic, which is the initial problem, how does he conquer it? Through fear, deception, and delusion.

Since this is Bible prophecy, the humans of earth respond accordingly.

The Horseman Destroyer then also provides the solution, which is the poisonous vaccine jab. This furthers the demonic operation, and results in the genocide of mankind.

Isn’t it interesting that the first Horseman uses the deception of “problem reaction solution!” … with the solution being a jab to genocide!

This is confirmed by the next horse which is red.

“And there went out another horse that was red: and power was given to him that sat thereon to take peace from the earth, and that they should kill one another:…” Revelation 6:4

The red horse is the warhorse. But the taking of lives is not only limited to bullets in the battlefield. The verse above says power was given to the destroyer on the horse to take peace from the earth, “that they should kill one another,”

Vaccination peer pressure will eventually contribute exponentially to the goal of the warhorse.

It is happening already. Citizens are being pressured to get the vaccine through coercion, job pressure, family pressure, the fear of loss of liberties. The reasons are endless. And while John Q Public escorts his elderly mother to the local Walgreens to get jabbed, little does he know that his allegiance to a lie is going to put his mother in the grave.

The cycle is being repeated all across the world. Folks are convincing their family members and friends to get the vaccine, but the end result is going to be the same. “They are killing one another.”

These words are not easy to write my friends. But this is where we are.

Where does this leave us?

As God’s people, we must raise the odds of survival for ourselves and our families. To do this, we must understand the chain of events that are coming. We must become familiar with Jesus and draw closer to Him, and also learn to hear His voice so that He can guide us through the minefield that is before us. We must strengthen our faith, aund become very acquainted with the promises found in the Word of God.

You must also prepare ourselves with mental strength because as events arrive, we’re going to see people perishing in massive numbers. As Americans, we are not used to that. But we must prepare to navigate through the images that even Hollywood movies is not able to mimic.

My friends this is going to require the strength of God. But if you’re a Christian, you can do it with His help. My wife Alison just went through this with the death of her father. She shared it here and we made a video about it, because we suspected that these days were coming and we wanted people to know that when their turn came, they could also walk through the valley of the shadow of death with Jesus at their side.

In the days ahead will be talking a lot about this matter. So please subscribe to notifications. You can also find me on Facebook at this link. I share these things there as well.

The good news for those who are able to endure, is that Jesus is coming soon and will rescue us out of this mess. He is our only hope, my friends. So begin seeking Him now. And please share this with everyone that you know.

May the Lord bless you and shower mercy on you and your loved ones,

If you are challenged, informed or blessed with this message, we appreciate your support: