The Trump Chronicles – An Analysis of the Coming Presidency – Part one

Note – this is going to be part one of a multi-part series that will reveal and expose the tyrannical darkness that is approaching America.

It is now behind us. Donald Trump won the presidential election and barring anything weird happening, like the Jill Stein recount overturning the election results, or anything else weird, Donald J. Trump will be inaugurated on Friday, January 20, 2017.

If you are a vigilant American Christian who believes in the Constitution, there can be no excuses. It is up to everyone of us to cautiously watch the upcoming Trump administration to make sure that it does not step over the bounds of governmental limits.

For some, this may be difficult, because based on what I observed during the election, many evangelicals purposely ignored some disturbing things about Donald Trump.

And I caught a lot of flak for it. I received hate mail. Accusations. Curses. Threats. One person wished that I would die.

But I stood my ground, and with Donna at my side, we trudged along and maintained our vigilance and concern about the coming Trump administration.

Why? Simple. Because I know what time it is. That cannot be changed. We are in the end times, and America is under judgment.

Some of my colleagues have been promoting the theory that a reprieve from God has arrived. To the natural man, the theory sounds good, but is it true?

America as a nation did not repent before the election. There were no corporate gatherings where people assembled to sigh and cry over the sins of the land.

The Book of 2 Chronicles is very clear. It says, “If My people will humble themselves…”

Ladies and gentlemen, the humbling never took place. So God did not hear it from Heaven. And if God did not hear it, then why would He send a reprieve? I am mystified that my old colleagues would overlook this major detail, and preach that greatness is coming to America.

Over the past year and a half, I have watched in agony as some of my peers made spiritual proclamations, declarations, and alleged prophecies about the election and its outcome. It is up to the remnant of God to hold all of them accountable.

This includes me. I do not get a free pass. But I am confident in my warnings. And I maintain that challenging times are approaching. And should Donald J. Trump become president, I am concerned that very DISTURBING events will come to pass during his administration.

I do not say this blindly. It is based on years of observation of the approaching New World Order and the rise of the end time beast. End time prophecy tells us that the elite of the world will bring about their plan for world consolidation and unification.

Who are the elite?

They are the ones that were discussed by many of the “watchman,” during the Obama presidency.

They are: the Bilderbergs, the Rothschilds, the CFR, The Society of Skull and Bones, The Committe of 300, The Club of Rome…and others…

They consist of corporations and banks that control the money system, and Central Banks, – they are Goldman Sachs, Credit Suisse, J.P. Morgan, Rothschilds Inc,…and others..

They are the global corporations that influence, lobby, extort, blackmail, tug and steer foreign policy. They are corporations, and oil companies that have influenced politicians to go to war, to nation build, to install puppet governments, and dictators.

They are the largest corporations in the world.

They are the ones that YOU have been warned about. But here is where it gets VERY disturbing…

Donald J. Trump is installing these same people, who are the ELITE of the world, to help him steer the coming administration.

He has nominated a Rothschild’s alumni to take over the Dept of Commerce. Wilbur Ross was with Rothschilds Inc., for 24 years. He served with them and acted as their representative to bail out Trump when his casino went bankrupt in the 1990’s. In essence, the Rothschilds rescued Trump almost 30 years ago, and now Trump is paying them back by appointing Ross as Commerce Secretary.

Conclusion – A proxy associate of the Rothschilds will be handed the reigns of the US economy.

Folks, have you heard any of the watchmen out there talking about this? If not, why not? This is the report. This is the truth. This is the play of betrayal that is in motion.

But it does not stop there, so far, Trump has tapped 17 ELITE Billionaires and is giving them the keys to America.

These billionaires are involved with Goldman Sachs, the CFR, they attend the Bilderberg meetings, Some of them are members of Skull and Bones. And these individuals are going to steer the ship of USS America into an engineered dollar demolition and economic crash.

“A Crash is  Assurred” – Jamie Dimon

Jamie Dimon, (CEO of JP Morgan Chase, CFR member, ) has been recruited by Trump to serve on his Strategic Policy Forum. What is this Forum? This is the advisory committee that will council Trump in his economic policy for America.

Dimon stated in an interview:

“…a crash of the markets is ASSURED. I don’t know if it will be in two or fives years but it will happen…We are going to have fiscal discipline. It’s imposed upon us or we do the right thing and impose it on ourselves…”

Jamie Dimon said this two years ago. As the CEO of JP Morgan, he knows that the crash is coming. It is not a coincidence that he has been tapped by Trump.

For Treasury Secretary, Trump has tapped another Goldman Sachs member, Steve Mnuchin who is a member of the CFR, and was also tapped by the secret society Skull and Bones like George W. Bush.

Stephen Schwarzman (Skull and Bones Member) is the Chairman for Trump’s Strategic Policy Forum. He is a billionaire and CEO of Blackstone Inc. He specializes in slicing, dicing and selling off bankrupt companies. He also excels in selling American companies to China. He recently sold the New York Waldorf to a Chinese company. He also sold off 25% of the Hilton Hotels to a Chinese company. He lives in John D. Rockefeller’s 34 room mansion on Park Avenue in New York. When the rich of the world discuss the powerful ones in their ranks, they mention this man, Stephen Schwarzman. He is one of the chieftains of the elite, and now he is the chairman of Trump’s economic Committee.

I could spend a lot of time on the absurd betrayal of Trump who promised outsiders. He promised to drain the swamp. It ain’t happening folks. The swamp is getting dredged so that bigger boats will fit.

And for those who may not get the severity of this…

…The elite are taking over the coming Administration.

…The Bilderbergs have a seat in the coming administration.

…The Rothschilds have a proxy representative in the coming administration.

…add the CFR, skull and bones…and other members of those who are going to noose the Earth.

But where is the outcry? Trump is betraying his promises. And the church is strangely silent.

Under his presidency, it is already shaping up that we will see one or several of these events including; the financial crash of the economy, civil war, war with other countries, and possibly a World War.

As these things begin taking place, it will become apparent that Trump is a champion at persuasive deception. Unfortunately, a large part of the population will never see it.

I hope that this does not include you.

Ladies and gentlemen, right now a great deception is taking place. It is the battle of truth over make-believe.

Are you struggling with these words? If you are, I understand. But I have to share this information, because I have to tell the truth to God’s people.

You need to know the truth my friends.

You need to know that great challenges are coming so that you can prepare spiritually and get your house in order. This means a lot of soul-searching and spiritual housecleaning will need to take place in your life and in the lives of your loved ones. It also means that you cannot go to sleep with your vigilance. The false message of peace peace from my colleagues is putting a lot of remnant people to sleep. It is also causing them to neglect the oil in their lamps. Please don’t neglect the oil from God. You’re going to need it.

Am I overreacting? I don’t think so. Trump is revealing his hand right now. He is not even the president yet. He is doing things that are very disturbing. To the casual observer, his actions appear unconventional. But to the astute one, Trump is telegraphing the type of president that he is going to be. His actions are also projecting that a foreign policy upheaval is on the way.

Based on his appointments, I expect to see several wars take place throughout the world. Trump is surrounding himself with generals who are warmongers. General Flynn, and General Mattis desire to accomplish the PNAC doctrine which was perpetual war and an invasion of the Middle East including war with Iran. But it does not stop there, Trump has already sent a warning shot over the bow toward China. He is provoking them for war, and he is not even the president yet.

Ladies and gentlemen, Donald J Trump was placed into office by the globalists. He was their choice all along. Over the past several decades, they have been grooming him and preparing him for the final chapter of the New World order plan.

The final chapter folks. It is also a part of Bible prophecy. I will be presenting all of the disturbing information in future reports.

Not many have seen it yet, but Trumps campaign motto is Bible prophecy. You know those hats that Trump supporters wore during the campaign?

Make note of the picture below. IN the ball caps, the word – “Great” is over the forehead?

Now make note of the prophecy about Babylon,

“And upon her forehead was a name written, MYSTERY, BABYLON THE GREAT,…”

To those with the eyes to see… It is below: 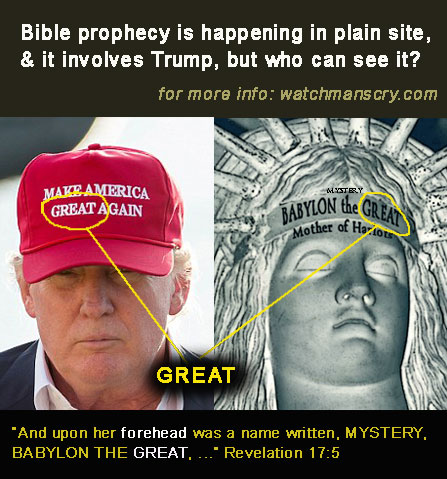 Now that Trump has theoretically won the election, it will be necessary for all of us to maintain vigilance.

And with this I close…

… this is going to be part one of a multiple series expose’ on the coming Donald Trump Administration. In future releases, I will be sharing the results of my research based on factual evidence and truth. I know that it will not be popular. I know that it will anger a lot of the Trump surrogates out there. I know that some of my ex-colleagues will not like it, but I must tell the truth and warn all of you.

Brethren, I will stay on the wall as long as the Lord allows it. And I vow that I will never leave my post or give you a sanitized message of false peace.

Please pray for me and my family. We have been facing a few challenges. 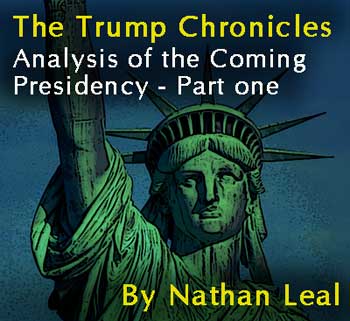