A Challenge for the Remnant

In Part 1 of this series, we introduced the reasons for our concern with the possibility of a Trump Presidency. We also discussed several prophetic glimpses and warnings including the attack of the golden eagle and what it means for the future of America.

In Parts 2 & 3, (link below) of this release, Donna Leal joins the discussion as we visit a biblical challenge for God’s people. In the parable of the ten virgins, Jesus tells us that in the last days, half of the virgins were not ready.

It is because they were deceived into thinking that there would be no need for oil in their lamps. In other words, they were told that the end times would be bright and not dark,

…translation – They believed that all would be well! And folks, this is happening now with the promise of a Trump rescue.

But ladies and gentlemen, all is not well. A crash is coming. So is war!

This message will go into the biblical reasons why we need to be wary of the present promise of peace, peace through Trump or any other victorious candidate.

The leaven of the pharisees and of Herod is trying to deceive. This discussion will also visit the present deception of confusion that is infecting the remnant body of Christ. And it offers a remedy.

By the way, this information does not imply that Hillary or Bernie are viable alternatives. The program will also give evidence that Hillary Clinton has been groomed by satanist, Saul Alinsky. (Notes are below.)

The end times are here. So let’s stay vigilant.

Please share this with your friends and you family.

Show Notes for the program

Who was he? He was an activist from Chicago who wrote the book on left wing activism.

Below is a quote from a dedication page of Saul Alinsky’s book – Rules for Radicals found here.

Lest we forget at least an over-the-shoulder acknowledgment to the very first radical: from all our legends, mythology, and history (and who is to know where mythology leaves off and history begins—or which is which), the first radical known to man who rebelled against the establishment and did it so effectively that he at least won his own kingdom—Lucifer. —SAUL ALINSKY

Below is one of the correspondence letters between Hillary Clinton and Saul Alinsky, who was a Satan worshiping left wing activist.

Make note of the first sentence in her letter below, – “When is that new book coming out? She then calls it a – “Revelation.”

I wonder if the “Revelation” includes his worship of Satan? 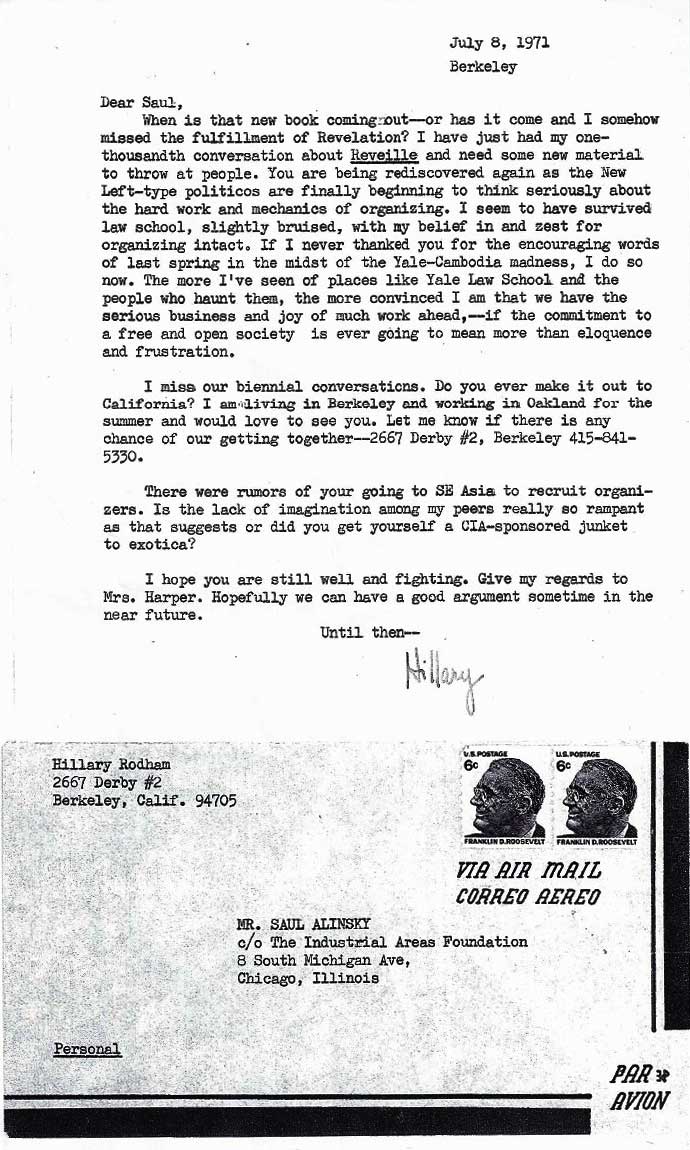 Below is the response from Saul Alinsky’s office 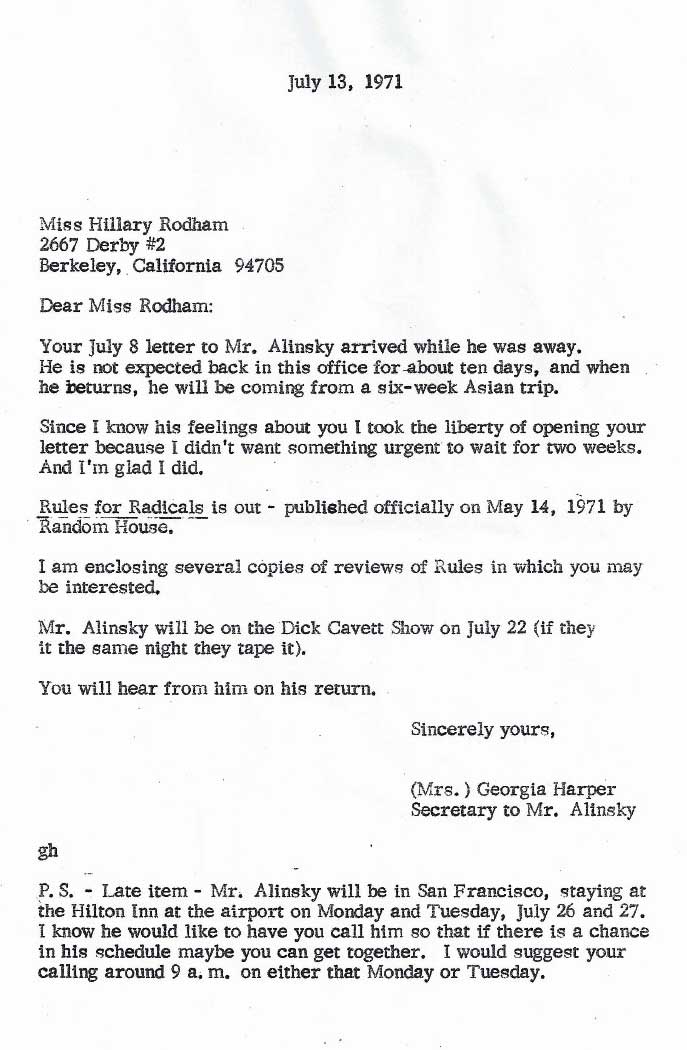 This shows that Hillary has been a life long student of left wing radicals.

But is anyone surprised?

* RULE 1: “Power is not only what you have, but what the enemy thinks you have.” Power is derived from 2 main sources – money and people. “Have-Nots” must build power from flesh and blood. (These are two things of which there is a plentiful supply. Government and corporations always have a difficult time appealing to people, and usually do so almost exclusively with economic arguments.)

* RULE 2: “Never go outside the expertise of your people.” It results in confusion, fear and retreat. Feeling secure adds to the backbone of anyone. (Organizations under attack wonder why radicals don’t address the “real” issues. This is why. They avoid things with which they have no knowledge.)

* RULE 3: “Whenever possible, go outside the expertise of the enemy.” Look for ways to increase insecurity, anxiety and uncertainty. (This happens all the time. Watch how many organizations under attack are blind-sided by seemingly irrelevant arguments that they are then forced to address.)

* RULE 4: “Make the enemy live up to its own book of rules.” If the rule is that every letter gets a reply, send 30,000 letters. You can kill them with this because no one can possibly obey all of their own rules. (This is a serious rule. The besieged entity’s very credibility and reputation is at stake, because if activists catch it lying or not living up to its commitments, they can continue to chip away at the damage.)

* RULE 5: “Ridicule is man’s most potent weapon.” There is no defense. It’s irrational. It’s infuriating. It also works as a key pressure point to force the enemy into concessions. (Pretty crude, rude and mean, huh? They want to create anger and fear.)

* RULE 6: “A good tactic is one your people enjoy.” They’ll keep doing it without urging and come back to do more. They’re doing their thing, and will even suggest better ones. (Radical activists, in this sense, are no different that any other human being. We all avoid “un-fun” activities, and but we revel at and enjoy the ones that work and bring results.)

* RULE 7: “A tactic that drags on too long becomes a drag.” Don’t become old news. (Even radical activists get bored. So to keep them excited and involved, organizers are constantly coming up with new tactics.)

* RULE 8: “Keep the pressure on. Never let up.” Keep trying new things to keep the opposition off balance. As the opposition masters one approach, hit them from the flank with something new. (Attack, attack, attack from all sides, never giving the reeling organization a chance to rest, regroup, recover and re-strategize.)

* RULE 9: “The threat is usually more terrifying than the thing itself.” Imagination and ego can dream up many more consequences than any activist. (Perception is reality. Large organizations always prepare a worst-case scenario, something that may be furthest from the activists’ minds. The upshot is that the organization will expend enormous time and energy, creating in its own collective mind the direst of conclusions. The possibilities can easily poison the mind and result in demoralization.)

* RULE 10: “If you push a negative hard enough, it will push through and become a positive.” Violence from the other side can win the public to your side because the public sympathizes with the underdog. (Unions used this tactic. Peaceful [albeit loud] demonstrations during the heyday of unions in the early to mid-20th Century incurred management’s wrath, often in the form of violence that eventually brought public sympathy to their side.)

* RULE 11: “The price of a successful attack is a constructive alternative.” Never let the enemy score points because you’re caught without a solution to the problem. (Old saw: If you’re not part of the solution, you’re part of the problem. Activist organizations have an agenda, and their strategy is to hold a place at the table, to be given a forum to wield their power. So, they have to have a compromise solution.)

* RULE 12: Pick the target, freeze it, personalize it, and polarize it.” Cut off the support network and isolate the target from sympathy. Go after people and not institutions; people hurt faster than institutions. (This is cruel, but very effective. Direct, personalized criticism and ridicule works.)

Bill Clinton and his secret island:

Former President Bill Clinton was a much more frequent flyer on a registered sex offender’s infamous jet than previously reported, with flight logs showing the former president taking at least 26 trips aboard the “Lolita Express” — even apparently ditching his Secret Service detail for at least five of the flights, according to records obtained by FoxNews.com…. more at link.