This is a prayer request for my wife Donna. Early this morning 4 AM, Donna had to be taken to the Emergency Room with horrible abdominal pains. The diagnosis was that she has an ovarian cyst (that she did not know about,) and it ruptured inside of her. The bursting cyst caused interior bleeding and risked further complications of septic infection. I have never seen Donna in this much pain. She told me it was worse than giving birth. 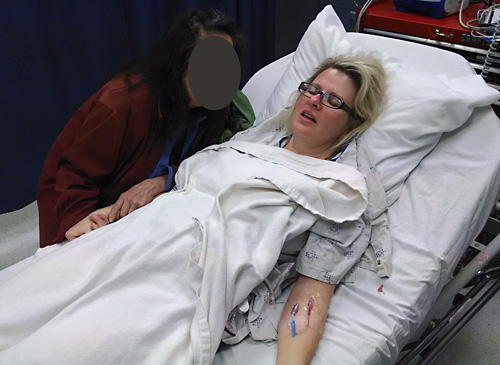 It took the doctors 4 hours to figure it out, (over 100 ultrasound pictures.) When they found it, it was revealed – she had interior bleeding from a burst cyst.

The doctor told me that the pain is similar (literally) to being shot in the stomach by a gun.

She has been given medication to help with the pain, and to combat any infection and has been released. She is going to be in recovery at home for awhile.

I am asking for prayer for her complete recovery, and also that God will supply all of the our needs to deal with this unexpected emergency.

Thank you and may the Lord bless you.