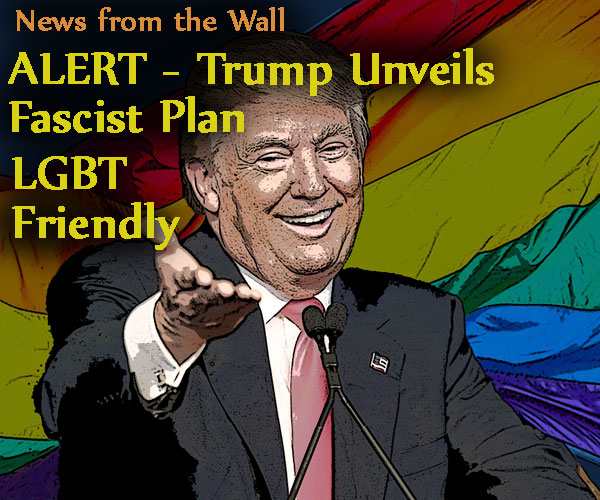 Trump’s latest tweet says it all. Trump is betraying conservatives and Christians.

This Special Edition of News from the Wall will reveal that Trump has finally shown us his colors. Trump has been deceiving his followers. He plans is to force homosexuality on America. It was revealed June 14, 2016

Also, Trump has plans for a Fascist Party in America. He announced it in the month of May and it slipped under the radar.

This is not satire or a joke.

Trump has told us he is a nationalist. Several weeks ago, he stated – “The GOP will become the ‘worker’s party’ under me. 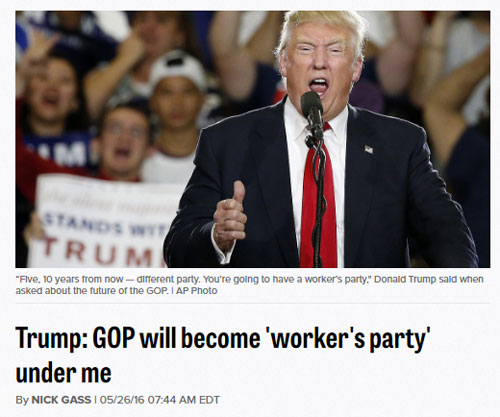 Do you see it folks? LGBT friendly and now this? This is taking place while the alternative media and remnant radio has been infiltrated. Also, who is Roger Stone, Trump’s hatchet man? He is on the prowl and is deceiving the Alternative media.

Donna Leal joins the program to discuss these developments.  Ladies and Gentlemen, this is no small matter. Please listen to this program and then share it  with friends and family.

Show Notes for the program

Trumps Twitter Page where he posted his Homosexual betrayal.

What?? That’s right folks. The grandeur promise of Trump is now showing itself to be a lie:

From think Progress:
Donald Trump Thanks The LGBT Community. But For What?

And then we had his admission that Trump the Nationalist wants to change to Republican Party into the Worker’s Party. By the way, Hitler’s party was: National Socialist German Workers’ Party

The GOP will become the “worker’s party under me.

Unless you can fake sincerity, you’ll get nowhere in this business”
“Politics isn’t theater. It’s performance art. Sometimes, for its own sake.”
“Don’t order fish at a steakhouse,”
“White shirt + tan face = confidence,”
“Undertakers and chauffeurs are the only people who should be allowed by law to wear black suits.”
“Hit it from every angle. Open multiple fronts on your enemy. He must be confused, and feel besieged on every side.”
“Always praise ’em before you hit ’em.”
“Be bold. The more you tell, the more you sell.” (attributed to advertising guru David Ogilvy)
“Losers don’t legislate.” (from Richard Nixon)
“Admit nothing, deny everything, launch counterattack.”
“Nobody ever built a statue to a committee.”
“Avoid obviousness.”
“Get your carbs from booze, not sweets”
“Never do anything till you’re ready to do it.”
“Look good = feel good.”
“Always keep the advantage.”
“He who speaks first, looses.”
“Attack, attack, attack, never defend.”
“When i hear the word culture, I reach for my gun.”
“Democrats are the party of slavery, Republicans are the party of freedom.”
“Folks want government out of the bedroom and the boardroom.”
“Roy Cohn wasn’t gay. He was a man who liked having sex with men.”
“Lay low, play dumb, keep moving.”
“Never turn down the opportunity to have sex or be on TV.” (attributed to Gore Vidal)
“Nothing is on the level.”